Wilfried had contacts to Kansk International Video Festival already since many years, at first as an artist. For some reasons which cannot be understood, Wilfried’s submissions to the festival were never successful, so called, there were technical problems. Fact is, after the founder of the festival hired external Russian curators as temporary festival directors, the problems vanished and in 2010 suddenly Wilfried was invited to present the latest CologneOFF Festival Edition in Kansk. – Kansk is a place located in Siberia in the East of Krasnojarsk, counting not even 100 000 inhabitants. But after the collaps of the Communist system, here a kind of local cinema industry developed, a kind of “hollywood” in Siberia, including huge arichives of films produced during the Communist era. After Wilfried had accepted the invitation, the festival team in Kansk worked that the Goethe Institute in Novosibirsk was funding Wilfried’s travel to Siberia, and then some days ago, it was so far, Wilfried started from Düsseldorf to Moscow where he changed the plane to Krasnojarsk, and at the airport a taxi was waiting for Wilfried driving him through the endless forests of the Tundra. This was an incredible ride, because the road where the taxis was riding on was consisting of big deep holes and the taxi driver had to drive slalom – in fact the taxi was longer in the air flying over the road holes than usually driving, and then after many hours, Wilfried was stepping out of the car his back full of pain. The car was standing in front of a typical Communist building – and at the door appeared Nadya – the festival director, welcoming Wilfried after his adventurous ride at the hotel. OK – thus, this was Siberia! And then it became obvious, this hotel was situated far away out of the actual city, and – it was not easy to go from there anywhere. One needed either to take a taxi, which was less recommended or a bus, which was recommended taking more than half an hour to the city centre, which, if one was stepping out at the final destination was no real centre, because one did not see the city but only some invidual smaller buildings and a big church. So, Kansk was a strange place, so different than any other place where Wilfried had been before. Founded in the 19th century it was one station at the Trans-Siberian-Train and not far from the town dozens of Gulags, prison camps were existing, only to be campared with the Nazi concentration camps, but nowadays hardly any traces are left – the endless expanse of the Tundra is generating quite soon a kind of melancholia. Wilfried learned soon, what kind of relevance the video festival has for the local population. It is the only event during one year, when foreign guests are comming and the international video program is bringing the world to this middle of nowhere. In this way, the local people are really open minded and hospital.
The festival location is representing the cultural center of Kansk including a huge theater which is used as a cinema, and what kind of surprise, the huge space is crowded with really many film enthusiasts more than one is accustomed at many Western places.. Wilfried is thinking, to be at such a place far away from any civilization is really making sense, because culture is meaning to these people something fundamental, in contrary to the over-saturared Western people, who have in Cologne, for instance, the choice between dozens of different events each day. Here in the Tundra, culture means to be connected with the rest of the world in a very special way and the foreigners attending this even are telling their adventurous stories. The festival organisation is organising travels around Kansk to the Siberian Tundra, where certain tribes are still living their nomadic life since many centuries. Wilfried is impressed and he wishes that they will also have the chance to live their traditional self-determined life in future.
So, for Wilfried Kansk is a special experience – and this night, 20 August, 2012, Wilfried has his personal presentation in the huge theater. At the end end of the festival, Wilfried will be part of the jury selecting the prize winners, and – being in the jury was at this place – a good experience!
Particularly, when Wilfried will have returned to Cologne, retrospectively seen he is really happy to have had the chance to make such a jump to Siberia, because probably there will be no 2nd chance. Wilfried Agricola de Cologne was part of the international jury. Here is his small report:

“Being honest, when I started my travel to Kansk/Siberia I was not sure what could be expected.
But I was positively surprised by the festival and its organisation
at a place which is actually situated somewhere in nowhereland.

But, it is the only festival of that kind, in the incredibly sized Siberia,
and the festival was able to invite all artists/directors whose videos were selected. Even if not all invited artists were attending, many were
mostly inteernational, but also Russian artists, and more surprise – the big hall of the cultural center of the city was mostly well attended by a
very interested, sometimes even enthusiastic audience.
I learned what kind of relevance this festival has for the cultural identity of Siberia, so not only the city council, but also the cultural minstery of the region, press and media and above all the audience are standing behind this festival – and a resume, it really makes sense to support the honest and serious aims of all people involved.
In the West, sometimes people have forgotten what actually the reason should be for organising a festival, in Siberial, at least, it was really a meeting place.

Because I was part of the seven person jury which had to find besides a Grand Prix also some other prize winners, it was necessary that I stayed all the time, but it was a good experience! “ 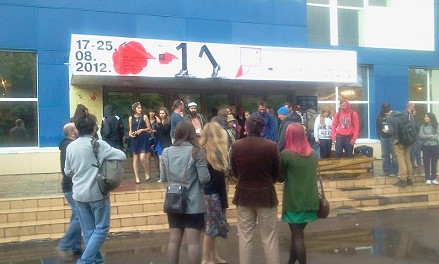 Kansk – waiting for the festival opening 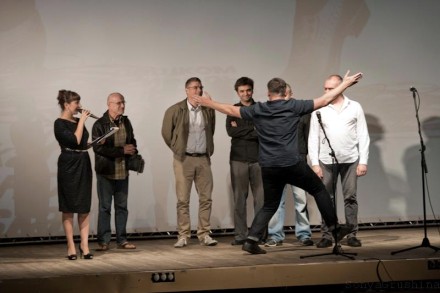 Kansk – installing the jury @ the opening 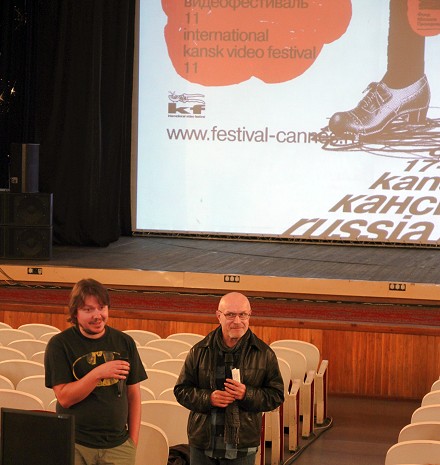 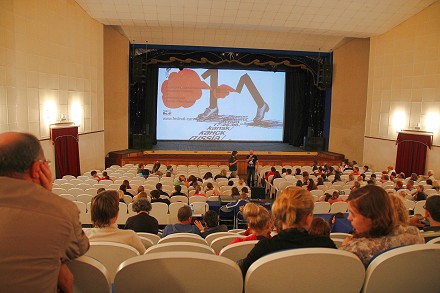 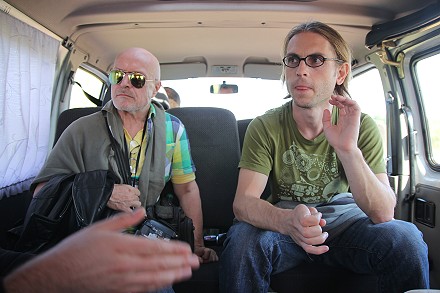 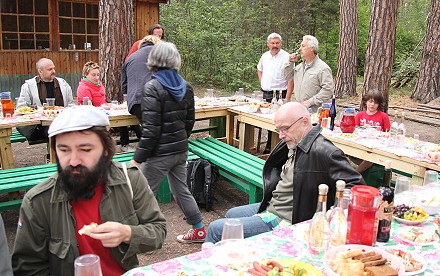 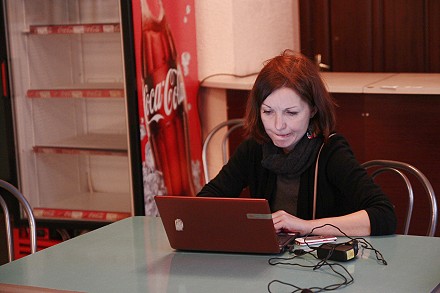 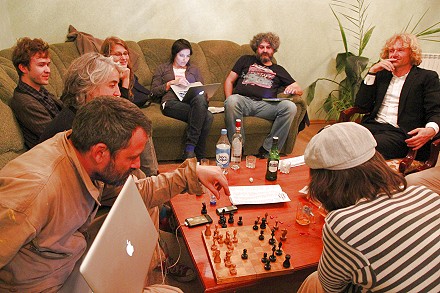 Socializing at the hotel 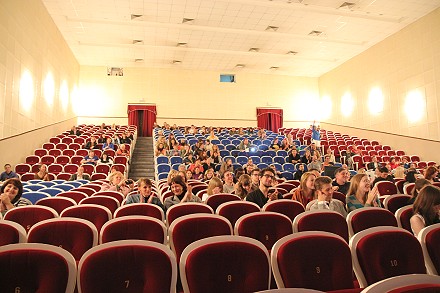 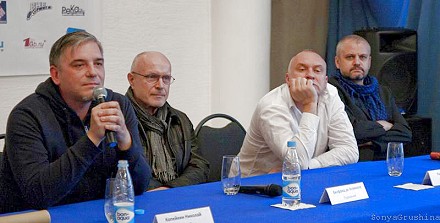 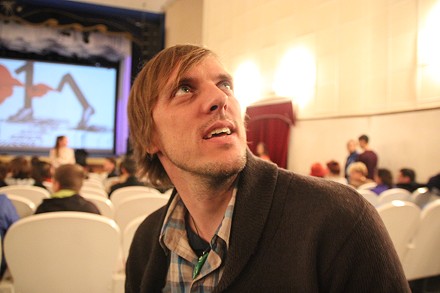 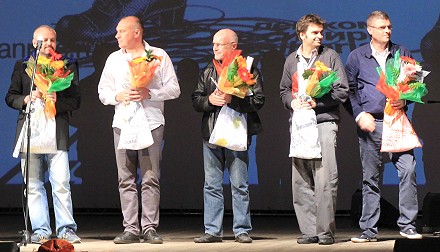 Agricola de Cologne among the jury members on stage 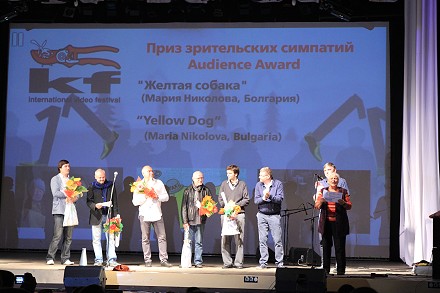 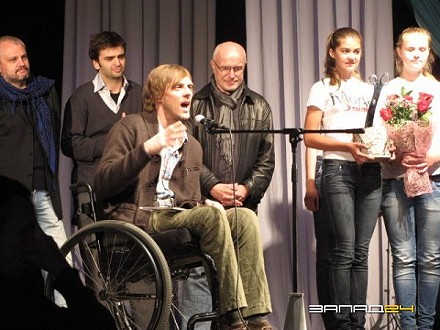 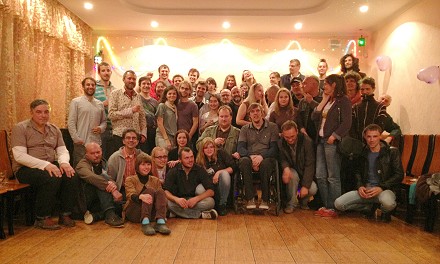